The state of technology for copying and distributing works also affects the optimal scope of copyright protection because technology determines the ease with which a copyright may be enforced or infringed. The development of networked digital technologies has affected—and, according to some, jeopardized—the efficacy of the exclusive rights. Paradoxically, at the same time such technologies have caused some to question the assumptions that lead to the conclusion that copyright protection is necessary for progress. This article explores the concept of different types of copying protection as slices of a pie, and argues that, since creators care about the size of the whole pie, the different slices can grow and shrink as technology changes. 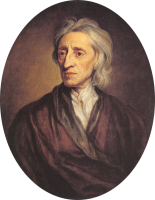 John Locke's foundational work argued that everyone has a natural right to property in his own labor, and one acquires property in other things by mixing one's labor with them. Locke's Treatises are cited by many as foundational to American democracy and the U.S. Constitution.

The existence of the public domain is a foundational principle of the U.S. copyright system. Unfortunately, the term ‘‘public domain’’ is not amenable to a simple definition. Professor Litman argues that creativity is not possible without a robust public domain, and in fact the "essence of authorship" is in "the process of adapting, transforming, and recombining" what is already out there.

William P. Alford, To Steal a Book Is an Elegant Offense (1995) (Preview Book)

Professor Alford describes the cultural acceptance of copying in China prior to the imposition of western notions of intellectual property protection in the late nineteenth and early twentieth centuries. Chinese culture develops with significant reference to the past. The importance of this interaction with the past for further cultural development makes copying of earlier works a culturally valuable activity.